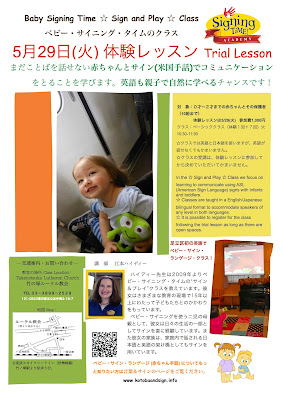 東京都足立区
竹の塚クラス Takenotsuka Class
in Adachi-ku, Tokyo
We are having trial lesson on Tuesday, May 29th in Takenotsuka for the new session of Baby Signing Time ☆ Sign and Play ☆ class. ５月２９日（火）に足立区竹ノ塚で次のベビー・サイニング・タイムのクラスの体験レッスンがあります。

言葉＆サインのベビー・サイニング・タイム“Sign and Play”クラスは、二つのレベルがあり、それぞれ８回のレッスンから成っています。ベーシック・クラスは、体験レッスン＋7回のレッスン。アドバンス・クラスは、初級レベル（ベーシック・クラス）を終えた方あるいはそれに相当するレベルを他の教室などで終えている方対象となり、８回のレッスンとなります。
The Kotoba & Sign Baby Signing Time ☆ Sign and Play ☆ class consists of two levels with 8 lessons each.  The Basic Class includes the Trial Lesson + 7 weekly lessons.  The Advanced Class is for students who have previously completed the beginner level, or the equivalent, and consists of 8 weekly lessons.

最近のリサーチで二歳になる時の25コの必要な言葉が見つかりました。二歳になる子がこの単語を使うないばいだと成長は順調ではない印の一つです。 Every 2-year-old should know at least these 25 words: researchers A checklist for toddler language development BY HEIDI EVANS / NEW YORK DAILY NEWS Monday, February 20, 2012, 10:42 PM Read more: http://www.nydailynews.com/life-style/2-year-old-25-words-researchers-article-1.1025968#ixzz1vO396x9y http://www.nydailynews.com/life-style/2-year-old-25-words-researchers-article-1.1025968?localLinksEnabled=false Turns out chatty toddlers who say “all gone” and “bye-bye” aren’t just cute — they’re showing off their essential language skills. Researchers have identified 25 “must have” words that every child should be saying when they turn 2. Kids who haven’t mastered them might not just be late talkers — they could be showing signs of autism, developmental delays or hearing problems . The 25 words — including Mommy, Daddy, baby, hot and hat — were the most commonly said of a list of 310 words that kids master when they first start to speak. Parents who are worried that their kids aren’t chatty enough should consider turning off the TV. A growing body of research also found that kids develop language more quickly if they are engaged in conversation instead of parked in front of kids’ programs . Professor Nan Bernstein Ratner, who moderated the panel at the American Association for the Advancement on Science where the findings were presented last weekend, said the 25 words are like the “canary in the coal mine.” “When a child doesn’t have enough words at the age of 2, that is not only a problem in its own right, but it’s a signal of a variety of other problems,” she said. The 25 words are just the baseline for toddler talkers. There is a wide range of language abilities in toddlers, and 2-year-olds’ normal range is from 75-225 words. Children who are late talkers usually have an average vocabulary of 25 words. Leslie Rescorla, director of the Child Study Institute at Bryn Mawr College who developed the checklist, said most kids have many more. “The bottom line is this: Children should have 50 words by the time they are 2 and they should begin to combine words into phrases,” Rescorla said. “ If they are not doing that, it’s worth evaluating them because they might have a problem you can start helping them with early.” Rescorla says most late-talking toddlers catch up. But their skills are likely to lag behind those of kids from the same background who were chattier at 2. There’s good news for bilingual families — their 2-year-olds are expected to have 25 words in only one of their languages. Upper West Side bilingual baby Violette Tarantino-Marie began to have a blizzard of words at 19 months. She initially spoke what friends called “Fringlish” when she was 19 months, but could rattle off more than 100 words in English at 2. She was a little less verbal in French. Now, at 3, she’s speaking up a storm in both languages. “We talk all day,” said her mom, Carla. 25 'MUST HAVE' WORDS FOR TODDLERS Mommy Daddy baby milk juice hello bye-bye yes no dog cat ball nose eye banana cookie car hot thank-you bath shoe hat book more all gone Read more: http://www.nydailynews.com/life-style/2-year-old-25-words-researchers-article-1.1025968#ixzz1vO6AN6xi
Posted by Houdini at 3:20 PM No comments:

There are many books that you can read even if you know just a few signs.  One of the favorites at our house is Here We Go Round The Mulberry Bush from the Child's Play Classic Books with Holes series. 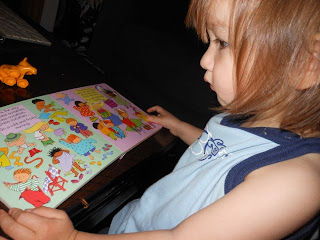 サインで読める絵本
Here is a video clip of Mega reading the page with bath and brushing teeth.  She is 21 months old in this video and uses ASL signs along with spoken words.  Since she is still young her pronunciation is not great but thanks to the signs it is easy to know what she is saying!
Posted by Houdini at 11:02 PM No comments:

I'm digging through the videos on my computer to find examples of signing.  Here are a couple of my daughter at 19 months old. 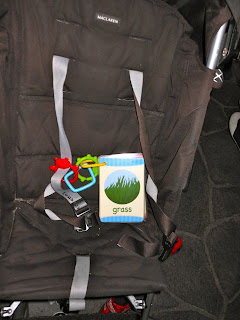 Add them to some baby rings and hook them to the stroller!  They make for great reading on trains or while waiting in lines.  The flashcards can also come in handy when your child is being shy and would rather point than speak or sign!
Posted by Houdini at 9:35 PM No comments: 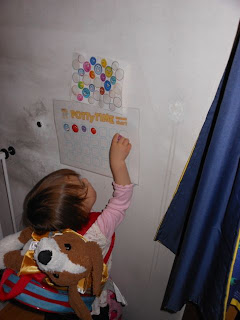 Miss Mega, my toddler, is loving her Potty Time Success Chart!
She filled it up today :-)
You can download your own Success Chart for free from the Potty Time homepage.  I have a penchant for laminating things so of course ours is laminated so we can use it over and over again.  Pair it with some sticker's your child loves and you're ready to go!
Posted by Houdini at 9:32 PM No comments: