The Sign of the Week this week is bike! 今週の手話は「自転車」です。

At our house we also use this sign for bicycle, tricycle and unicycle. 家では、一輪車、三輪車のこともこのサインを使ってます。

ママのひみつ: Here's another "mommy hint" that I've discovered - kids, even infants, like to know what is going on.  They want to know where we are going and how we are getting there.  The sign "bike" can be used to help explain the plan for the day in simple terms.  An example "We will ride mommy's bike to the store and then come home to eat lunch". Using the sign for "bike" in this natural setting not only helps your child to learn that the word and sign have the same meaning but also gives your child another way to communicate the word "bike" to you when she is ready.

Take a look at this dictionary for beginners to learn signs for other things you do each day!

Books for practicing the sign for "bike" as well as other forms of transportation:
"Bike"のサインを練習するためのおすすめ乗り物の絵本:
Small World: Away We Go
のりものいろいろかくれんぼ
Bears on Wheels

Here is a clip from when my daughter was 15 months old.  At this age many kids can make noises but have fewer than 10 spoken words. In this video she uses 7 signs, 3 for words that she was not able to clearly pronounce until a year later (bicycle, airplane, motor cycle).  An additional benefit we enjoyed was that she could play with her older brother, using signs, clearly expressing which toys she wanted to use.  As a mom this was wonderful to see!
Posted by Houdini at 8:11 AM No comments: 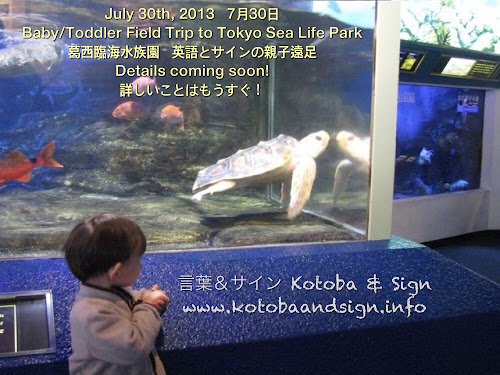 We are in the process of putting together another special field trip!
Please check back for details over the next week!
This will be the field trip homepage: http://www.kotobaandsign.info/tokyo-sea-life-park-field-trip.html

Posted with Blogsy
Posted by Houdini at 11:02 PM No comments: 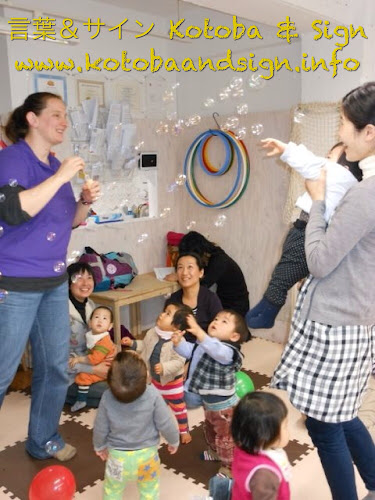 ○ My mom once suggested keeping them in my diaper bag for when we stop at a park or waiting outside with cranky kids. 私のお母さんがママバッグにいつもシャボン玉を入れた方がいいと教えてくれた。なぜかというと、公園に寄ってくるときや赤ちゃんがイライラしてるから外で待つ時にそれを出すと赤ちゃんは喜ぶから。
○○ During rainy season on days we can't play outside we blow bubbles in the bathroom and try to catch them.
梅雨の間にお出かけできない,外で遊べない日に風呂場でシャボン玉と遊ぶと楽しい！
○○○ Bubbles are also one of the activities we enjoy on the last day of the Advanced Class when the babies/toddlers graduate from the Baby Signing Time class! アドバンスクラスの最後のレッスン、卒業のお祝いにも使えます。
The sign of the week this week is... 今週の手話は...
You guessed it... BUBBLES シャボン玉!

Posted with Blogsy
Posted by Houdini at 12:25 AM No comments:

This week is off week for Hana House Baby Signing Time classes. Next week will be Takenotsuka's off week.
今週のハナハウスのベビー・サイニングタイム・クラスはoff weekでした。来週は竹の塚のoff weekになります。 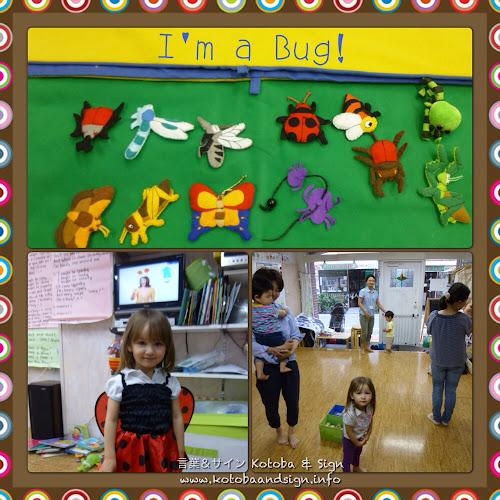 At Hana House last week we had our "Bugs Stop, Bugs Go" lesson. We searched for bugs, pretended to be bugs and practiced stopping and going like bugs!
この前のアドバンスクラスは虫のサインを学びました。こちらにクラス以外のサインを紹介します。

それと、歌のクリップを楽しんでください！And, for your viewing pleasure... A fun spin to the Itsy Bitsy Spider song from Rachel and the Treeschoolers!

Posted with Blogsy
Posted by Houdini at 11:13 PM No comments:

Faher's Day isn't just about your own father, not everyone has one, but also about acknowledging the influential and inspiring men in your life.  They are "Father Figures"so we take a few minutes today to thank them for all that they do! 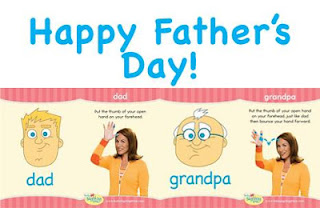 For your eading pleasure:
From The Importance of Fathers
"Changing, bathing, dressing, feeding, holding and playing with the baby are means to a good communication between a father and a child. While talking to an infant, using signs, or even using sign language, may help the bonding and the baby’s mental development."
Posted by Houdini at 8:41 AM No comments:

One of the great things about my Baby Signing Time classes is that families can attend together.  Older siblings can help and be a great signing example for the younger babies. 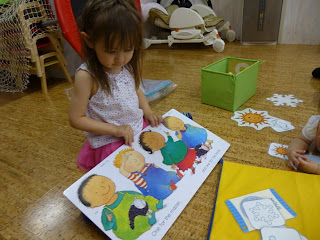 This is one of my special helpers getting the Baa Baa Black Sheep book ready!
Posted by Houdini at 4:50 PM No comments:

☆  Stuck inside because of rainy season? Check out Move and Grove! ☆

Rainy season has started in Japan. This time of year we have many days when we can't go to the park to play and since our houses are small it is difficult to burn off extra energy when playing inside. Signing Time has a DVD that is perfect for the rainy days! 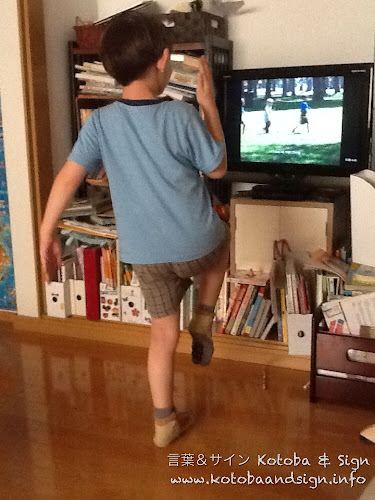 Today I'd like to introduce you to Signing Time Series 2 Move and Grove.
While not planned as an exercise DVD my kids turn it into one by acting out the various actions words/signs that are taught. After dancing around for 25 minutes the kids get tired and they've learned a few things in the process! 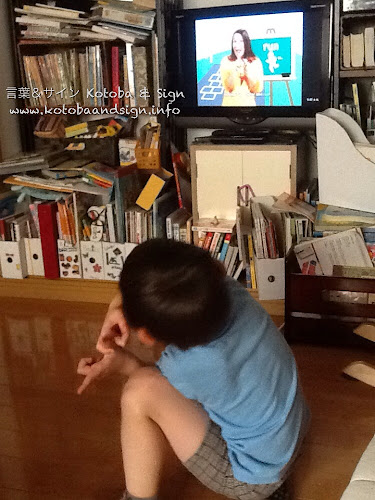 Like the other Series 2 DVDs there "breaks" for learning ABCs, numbers etc. included in the show. Each DVD also focuses on learning a song from start to finish with the last part of the show including the song for the episode in its entirety. This gives kids a real feeling of accomplishment when they can learn to sign and dance a full song!
My 5 yr oldies pretty good at following along with the DVD. The 2 yr. old turned to me after a few minutes and said "My exercising!" After which she started her own exercise routine in addition to the song. 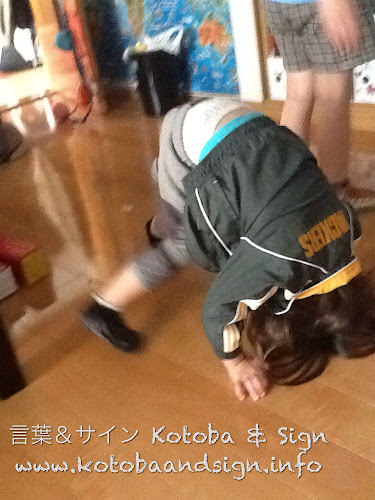 We don't really have space for somersaults, which she discovered pretty quickly!

Biggest sale of the year on Two Little Hands DVDs On Mon-Wed. (US Time) this week!
All DVDs and DVD/CD combos are $10.
Limit 2 of each kind... but with so many DVDs to choose from you can still end up buying over 60 DVDs!

Have some children's birthdays's coming and want to get a great gift?

☆ For a preschooler try Rachel and the Treeschoolers.

☆ Baby? How about Baby Signing Time?

☆  Child headed for 1st grade? Look at the ABCs and Practice Time DVDs for a multisensory and fun start to phonics and sight words.

☆  Potty Training while the summer is hot? Potty Time can help make it fun for everyone!

☆  Stuck inside because of rainy season? Check out Move and Grove!

With so many choices there is somethign for every kid! Don't be overwhelmed by the choices - ask (e-mail is ok!) and I'll share some suggestions! Here's your link to get to the sale!

While you're thinking of gifts why not pair a DVD with a board book or flashcards to keep the learning going?

Teachers, homeschoolers, parents, grandparents... there are plenty of other resources and ideas on the Two Little Hands homepage so why not take a look around?

Rachel even made a video to share about the sale!
Posted by Houdini at 7:27 AM No comments: