The abc signs are for so much more than just fingerspelling names!  Letter hand shapes can often be found in signs. ABCのサインはスペル以外のときに使えます。"s"の手の形は色んなサインにあります。

Ok, so you may be wondering how and when to use the sign for the letter "s"... here are a few ideas!
たといば：

Don't forget to check out the other items in the Kotoba & Sign Store as well!
Posted by Houdini at 1:56 PM No comments:

Signing Stories: At the Hospital

Today I received this comment from the mother of a student who was suddenly hospitalised: Thank 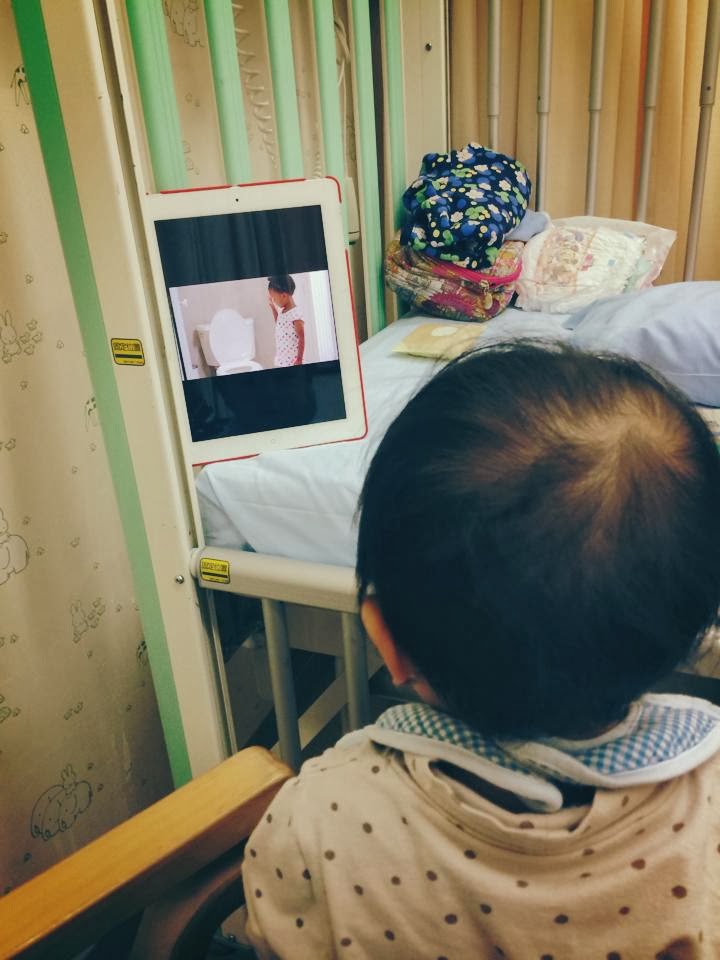 you, Signing Time! my daughter was full of joy when watching a sign video. It was also a review of toilet training signs I had forgotten.

入院してる生徒のお母さんから”Thank you, Signing Time! サインのビデオで娘大喜び。私は忘れてたトイレトレーニングのサインをレビュー”
以前の入院の時も”サインを学んでよかった”の話しもこちらにあります。
〜〜〜〜〜〜〜〜〜〜〜〜〜〜〜〜〜〜〜
You never know when a child might become sick or injured and require hospitalization. A hospital stay can be scary to a child who is seemingly too young to understand but signing can make the experience a little better. Our family experienced this firsthand about 5 years ago. I haven't shared this story with many people because the whole situation was very scary and I'd rather forget it... but perhaps the positive parts our experience can help encourage other families to continue signing.

When my son Zilla was about 1 year 8 months old he became suddenly ill in the evening and we had to take him to the emergency room. Since his symptoms were serious but not indicative of a particular problem the doctors admitted him so they could run various tests.
Most children at 20 months old can say a few basic words but Zilla was a non-stop signer with a vocabularyy of over 150 signs + words in both Japanese and English.  During the initial check-up he was able to tell the doctor that his tummy didn't hurt, his rear didn't hurt and he was scared.  For the first round of tests he had to have some x-rays.  We would not go into the x-ray room with him. I asked the doctors and nurses to give me a few minutes to explain what was happening.  They looked on with slightly confused expressions while I explained in simple words & signs to Zilla that he would go into a room with a really big camera.  The camera would take pictures of his tummy so we could see what was happening inside. When the pictures were all done the nurse would bring him back to mom and dad. 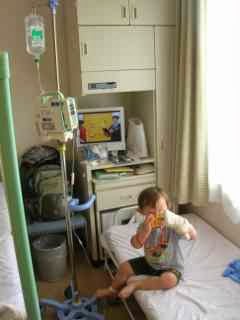 When Zilla was taken in for the x-ray and later for the CT scan he went fairly willingly.  I believe this was in part because he understood some of what was going to happen. When he came out from x-ray the technician came out to say Zilla kept making this movement. I explained that Zilla was signing "camera" and the x-ray technician was floored to see that Zilla really understood what was happening.

During the first part of the hospital stay Zilla was not allowed to eat or drink. How to you explain that to a 1 year old?  This is where Zilla's signing vocabulary came in very useful.  He knew the basics of spoken Japanese and English like いやだ, NO and だめ but he didn't have the pronunciation yet to explain why he would say "no" to things.  With signing and talking together he could express his frustration of feeling hungry but not being allowed to eat. He could also tell us he was "all done" with the IV.
Since we were in a teaching hospital a doctor and student doctors would make rounds once or twice a day. They often asked the same questions again and again. Zilla was able to sign his answers and I translated for him. Because he had the ability to communicate he could clearly tell us if he was in pain, where the pain was, when he was hungry, when he needed to go potty etc.  This was a stark contrast with other kids in the hospital who were a similar age.  For the other kids the doctor visits were like guessing games looking to see if the child moved like there was pain or feeling uncomfortable - no straight answers.

We ended up staying for almost a week.  I say "we" because my husband or myself had to be with Zilla all the time and only I had to stay with Zilla at night.  For a child, being pulled away from the comforts of home is another part of what can make a hospital visit frightening. Because the cause of Zilla's illness was unknown he was not allowed out of the room to go for a walk or to play. How do you keep a toddler fairly quiet and entertained all day in a small, shared hospital room? Baby Signing Time! 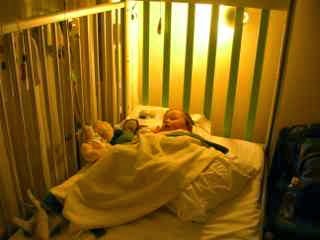 At this point in time I was not yet a Signing Time Academy certified instructor, I was just a mom trying to communicate with her kid.  We watched the DVDs at home, listened to the songs on the ipod and signed whenever we remembered to sign.  The hospital room we were in didn't have a DVD player but since I had Baby Signing Time songs on the ipod we could listen and quietly sing/sign along.  with an IV in his hand Zilla quickly learned to adapt signs as needed.  He seemed very comforted to have familiar music and activities from home. The music of the Baby Signing Time songs were a comfort even at night when Zilla woke suddenly and would look around confused and start crying for home.

It took a week before the doctors declared the cause of the original concerns to be of unknown origin - most likely viral. In that week I felt tested as a parent, stretched as a human and learned that I really don't want to stay in a hospital again.  However, I also felt thankful for how God lined up everything so we would find out about baby sign language, get started signing when Zilla was little and stick with it even after he began talking. The ability to communicate in the midst of this difficult situation was a Godsend!
Posted by Houdini at 10:27 PM No comments: 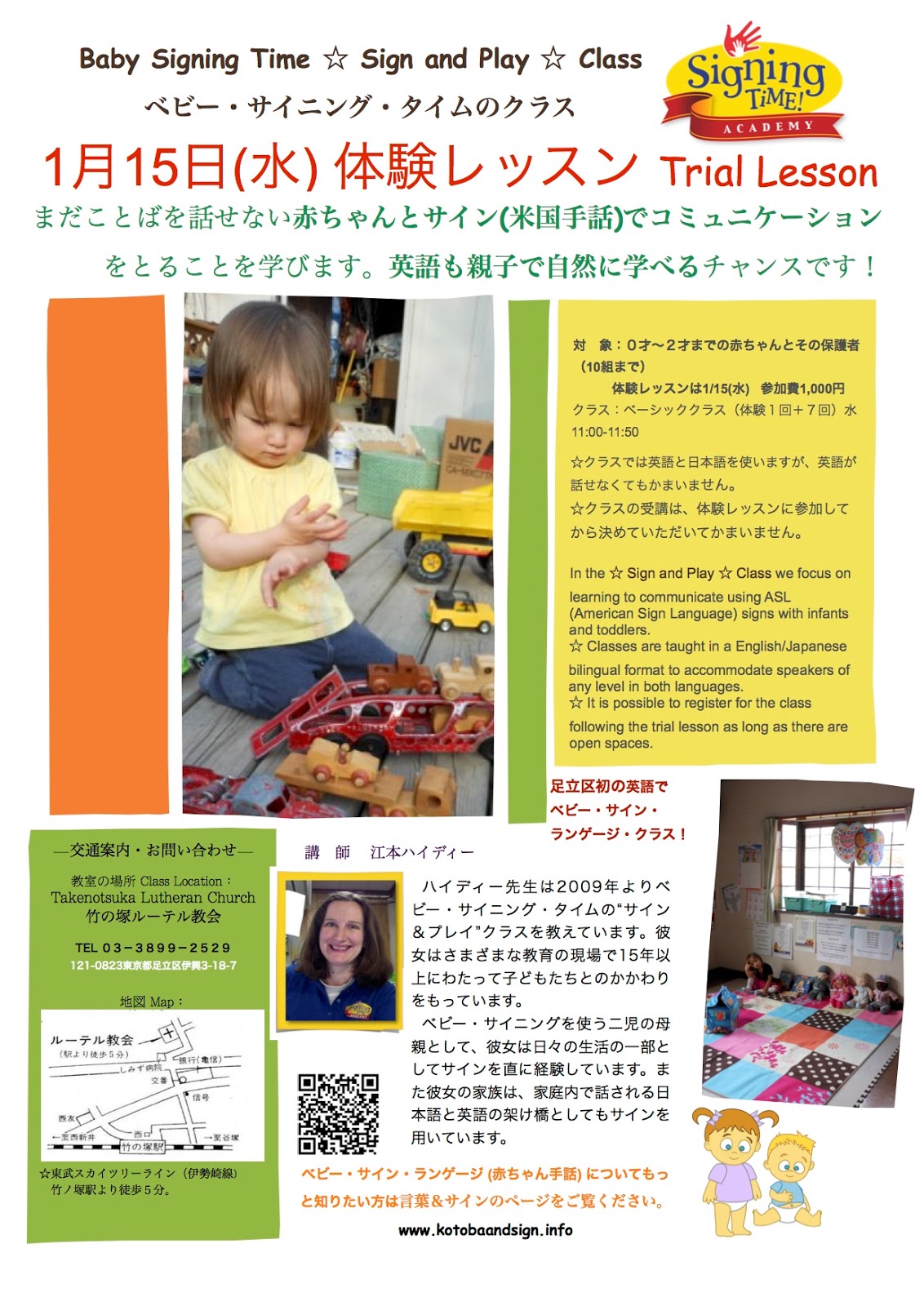 Posted by Houdini at 1:41 PM No comments:

2014年をサインから始まったらはどうですか？次の東京でのベビー・サイニングタイム・クラスは体験レッスンを受付中!
Are you ready to get a signing start to 2014? The next session of Baby Signing Time classes in Tokyo are starting soon! 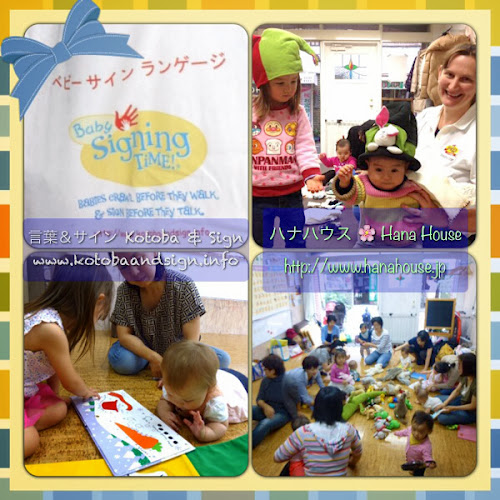 体験レッスンの詳しい事と申し込みは他のホームページまで。
Here are the trial lesson dates and locations:

http://www.hanahouse.jp
Posted by Houdini at 5:58 PM No comments: