Q4. I have heard that signing can be a bridge between spoken languages. What does that mean?
A. Perhaps the best way to explain this is by giving an example. In our family we speak Japanese and English daily.  When we sign we use the same set of signs with all the spoken languages. My husband will sign "apple" when saying "ringo" I sign "apple" when saying "apple". This helps our kids to see that both spoken words have the same meaning. Normally kids figure out the meaning from context of the spoken language and repeated exposure to the use of the word. Adding a sign helps to speed up this process when learning the meaning of a spoken word in an additional language. In our family we also sign with our minor languages. Signing has helped my kids to build their German vocabulary faster than if we had not signed.
Signing when learning two or more languages it not only something infants and toddlers benefit from but something that older kids and adults can benefit from as well. The STAR School 3-to-3rd Project has created a video which demonstrates how signing can be used in a bilingual school setting.

Q5. I've been signing with my child but my child is not signing back. When will she start to sign?
A. Each child develops at his her own pace. It is important to provide sign often and consistently. A rule of thumb is to sign whenever you say the word. At first it may take some time to get into this habit so placing flashcards in a useful location and listening to songs you can sign along with are two good starting points.
The age and developmental progress of the child is also an important factor.
0-5 months old - Most babies don't have enough hand control at this point to sign but they will begin to watch when people sign and make connections between words and their meaning. Look for a baby to become excited when seeing a sign or to turn away from the sign. Just because a child cannot create a sign/word yet does not mean the child doesn't understand the meaning.
6-9 months old - During this time the ability to intentionally move body parts increases greatly. Some babies will begin to sign, others will react when signed to. This is often an exciting time for parents because their children grow and change so quickly! 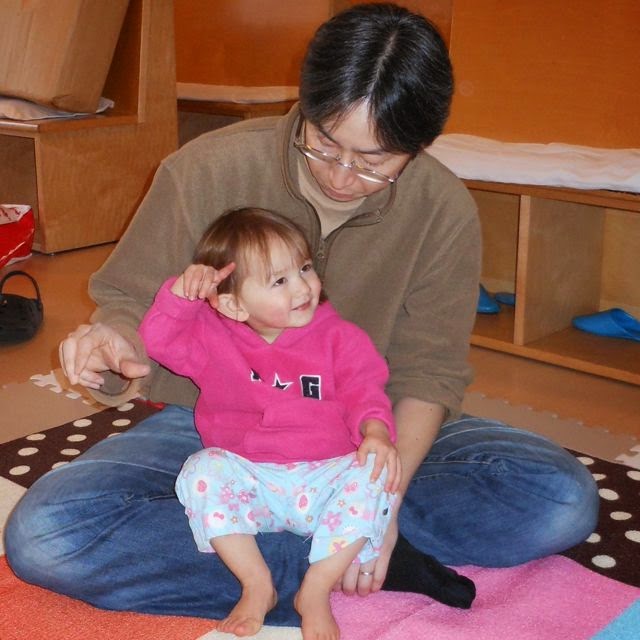 9-12 months - If you have been signing with your child for a month or more this is the time frame in which you will most likely see your child's first sign. Keep in mind that first signs rarely look like what an adult would sign simply because the child's hand control is still developing. Pointing, waving  clapping etc. can all be first signs when used in a meaningful way. Signing babies will often move their hands around "babbling" just as they use their mouths to make various sounds. The practice helps them to gain the control needed for when they are ready to sign to communicate.
12-15 months - Individual rates of development are perhaps the most evident during this time. I've had students who regularly use 30-40 signs a day at 12 months as well as students who are just starting to respond to signing at this age. Consistency and repeated exposure to signing is key. Sign when speaking, reading books, playing, singing... the more you sign the more your child will learn to sign.
15-18 months - What a fun time! There is an era of language explosion which often occurs during these months. Signing and speaking often increases by leaps and bounds. These toddlers reach a point where they can see/hear a word once and then will try to use it. It can be challenging for caregivers to keep up but it can also be a very rewarding time as the ability to communicate increases so quickly.
18-24 months - Toddlers love to talk and have many clear ideas but can't always communicate those ideas effectively. They can absorb signs quickly and use them to create 2-3 word sentences. Their creative ability to use the signs they know to communicate is a joy to watch.
24+ months - There are so many continued benefits that I'll have to make a post specifically related to that!


Q6. Are there children who don't learn to sign?
A. Normally developing children all sign eventually. We rarely think "My child will never wave good-bye" or "What if my child doesn't learn to point?" Being an "early" or a "late" signer is nothing to worry about. It just is what it is. I've never had a student who couldn't sign - it is just a matter of time until they are ready to sign.  It can be a challenging for parents who don't see signs yet and some parents do give up signing. I encourage them to hang in there and watch for their child to react to the signs they are using. Some kids seem to be waiting to learn the signs for their favorite things. I had a student who didn't use the clothing signs with her child, choosing to focus on manners instead, but when the child started signing the first signs were all about clothes! This is a reminder to use all the signs you know because you don't know what will spark your child's interest.
While there are a few situations in which a child can not learn to sign those situations are extremely rare.  Signing has become a key part of many speech and therapy programs for children facing a variety of challenges. In some cases signing has given a child a way to communicate when conventional medical knowledge expected that child to never be capable of communication.

Get started today with the My Signing Time TV Digital Player!

Sign up for a free trial. There are apps for phones, tablets and smart tvs.